Orlando, Fla – Just as one nurse gently placed a mask on 8 year old Calvin Barr to administer anesthesia before his spinal surgery recently, another quietly stepped to the foot of the bed and snapped a photo of him with a smartphone.  Calvin playfully squinted at the nurse with the phone and through the clear blue mask you could see a faint smile.

A few seconds later in a waiting room down the hall, Emily Barr’s smartphone chimed, indicating she’d received a text message.  It was the photo the nurse had just taken of her son Calvin.  After seeing it, Emily smiled herself.

Over the next three hours at Arnold Palmer Hospital for Children in Orlando, Florida, Emily and her husband Calvin Barr, Senior, would receive a half dozen more texts.  Some were just a sentence or two updating Calvin’s status, others contained photos or videos explaining exactly what doctors were doing during different phases of his surgery.

“I admit I wasn’t sure about the idea at first,” said Mrs. Barr, “but being able to get that information has been very good.  We could see what was going on and constantly knew his status and that’s been very reassuring to us,” she said.

The Barrs are among the first to take advantage of a new app which feeds information from the operating room directly to the smartphones of a patient’s family and loved ones.  It’s called EASE, which stands for Electronic Access to Surgical Events, and is designed to do exactly what its name implies – ease the minds of those who are waiting and worrying about a child who’s undergoing surgery.

“Some of these procedures can go on 4 or 5 hours and that can be really tough to deal with unless you’re getting decent information all the time,” said Dr. Jonathan Phillips, the pediatric orthopedic surgeon who performed Calvin’s operation.  “This app has really made a huge difference in the way we communicate during surgery,” he said.

The app was developed by a pair of anesthesiologists in the cardiac unit of Arnold Palmer Hospital.  “No matter how much we tried to reassure parents before surgery, we always got that same look of fear in their eyes as we took their children into the OR,” said Dr. Kevin de la Roza, co-creator of EASE.  “We thought there’s got to be a better way to communicate with them throughout this process.”

So de la Roza teamed up with Dr. Hamish Munro who knew privacy for the patient was just as important as the information they were hoping to share with loved ones.  “We use 256 bit encryption for all messages both in transit and at rest,” said Dr. Munro, which is the same level of security used in mobile banking transactions.  “We also control user access, which means only the hospital can authorize people to use the app and we all have special training to make sure we’re in compliance with HIPAA,” he said.

Also, like the popular photo-sharing application Snapchat, all messages and images sent through EASE are automatically deleted within 45 seconds.

Inside the OR, developers have taken steps to make the use of the app as seamless and inconspicuous as possible.  For each operation, a circulating nurse is assigned a phone and is responsible for keeping track of the progress of the surgery and keeping the family informed.

“We want it almost unnoticeable in the operating room,” said Dr. Munro.  “Actually, the circulating nurse is already responsible for updating the family, this is just a different way to do it.”

Since the messages and images are sent directly to smartphones, that means family members don’t have to sit in a hospital waiting room to get information.  In fact, by downloading the app, updates can be sent during surgery to family members or loved ones anywhere in the world.

So far, reaction has been overwhelmingly positive.  “Pictures speak a thousand words and videos can speak a million,” said Dr. de la Roza.  “We’ve found the families just love being involved with this because it’s very educational.  It’s the fear of the unknown that we’re answering for them,” he said.

Ninety minutes into his son’s surgery, Calvin Barr, Senior agreed.  “This is a very intense time for my wife and me,” he said.  “It’s really giving us peace of mind to actually know that our kid is in good hands and we’re getting these updates on his progress,” he said.  “It’s almost like we’re right there with him.” 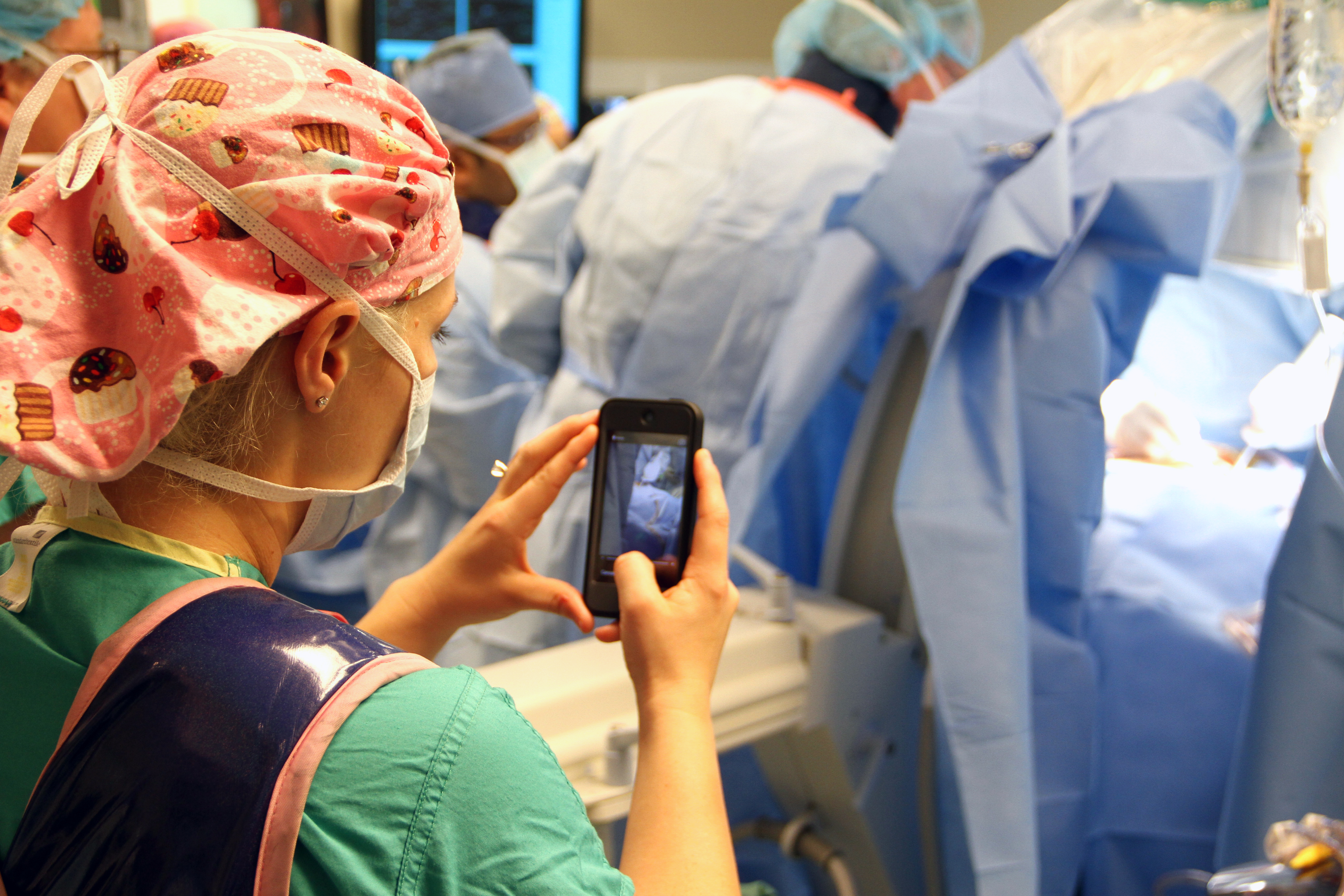 A nurse takes a photo during a recent surgery on an 8 year old boy at Arnold Palmer Hospital for Children in Orlando, Florida. Doctors there have developed an app that allows nurses to safely and securely send texts, photos and videos from the OR directly to the smartphones of family members in an effort to keep them informed on progress during surgical procedures. See how the app works here: bit.ly/1x820XI 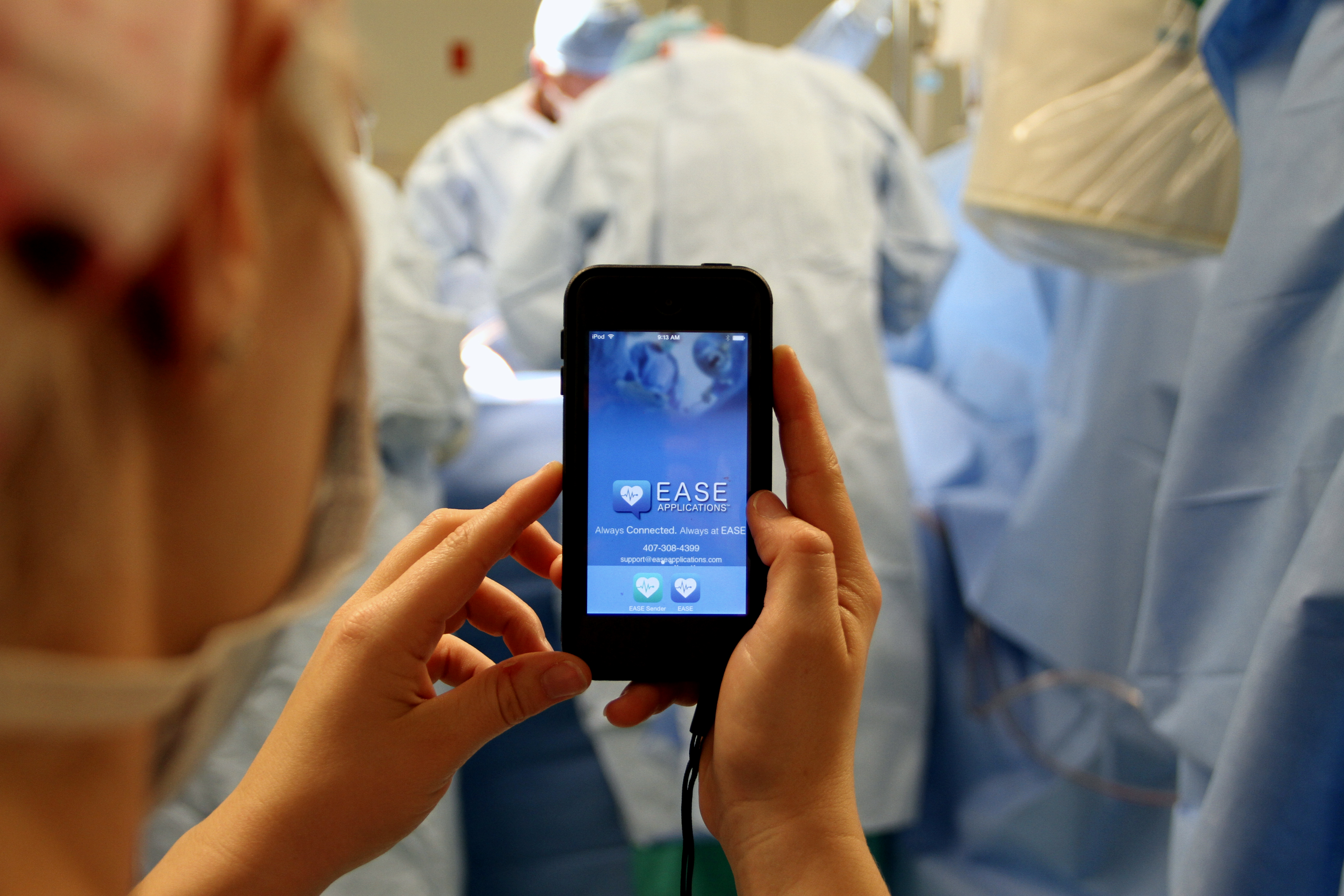 A nurse uses the EASE App, developed by doctors at Arnold Palmer Hospital for Children in Orlando, Florida. EASE stands for Electronic Access to Surgical Events and is designed to ease the minds of worried family members during surgery on children. The app allows nurses to safely and securely update families by sending text messages, photos and videos to their smartphones during the procedure. Details here: bit.ly/1x820XI 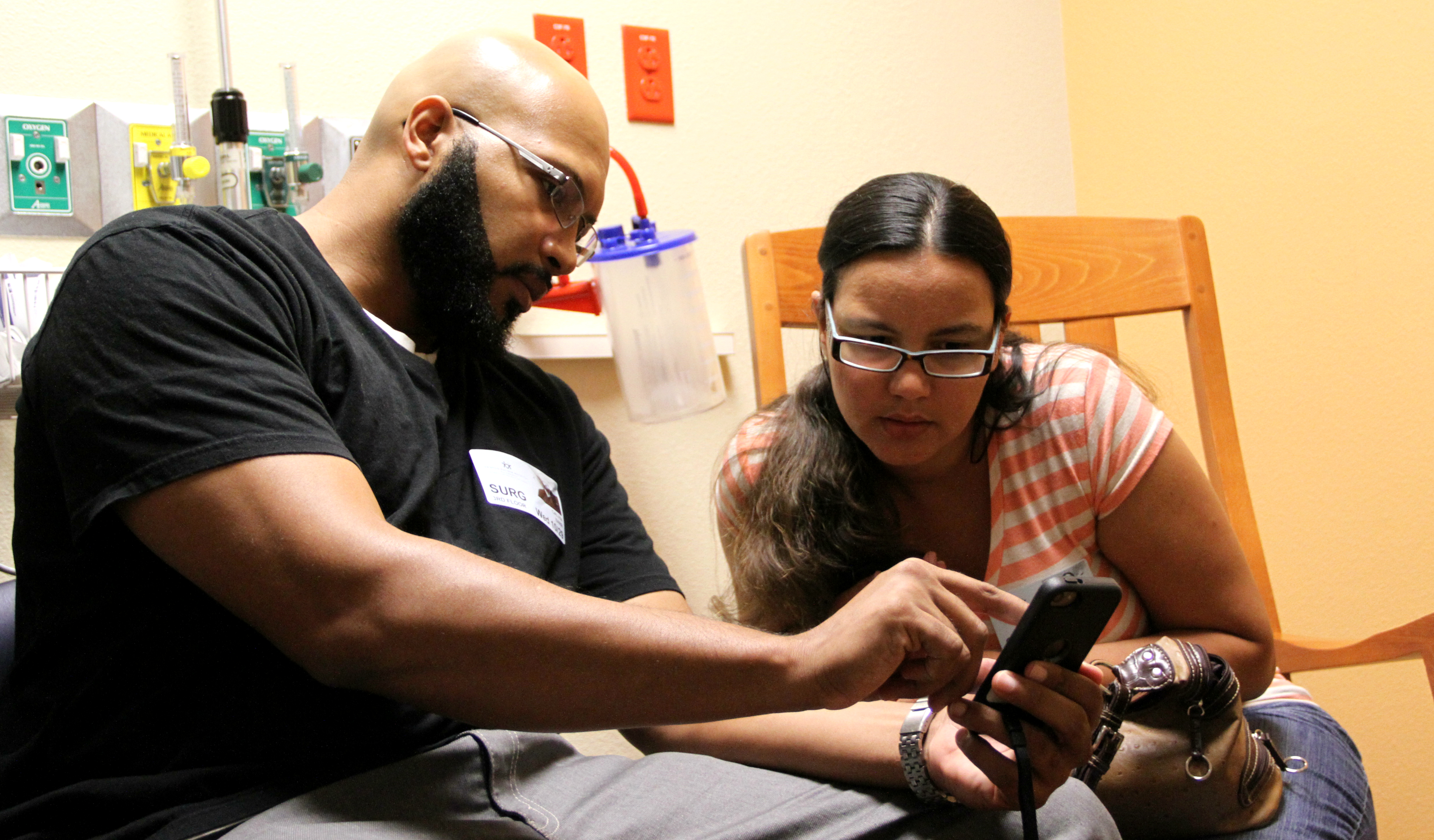 Calvin and Emily Barr look at an image of their son, Calvin, Jr., during a recent surgery at Arnold Palmer Hospital for Children in Orlando, Florida. The Barrs signed up to use the EASE app during their son`s surgery, allowing them to get updates via smartphones, including text messages, photos and videos. See how the app works here: bit.ly/1x820XI 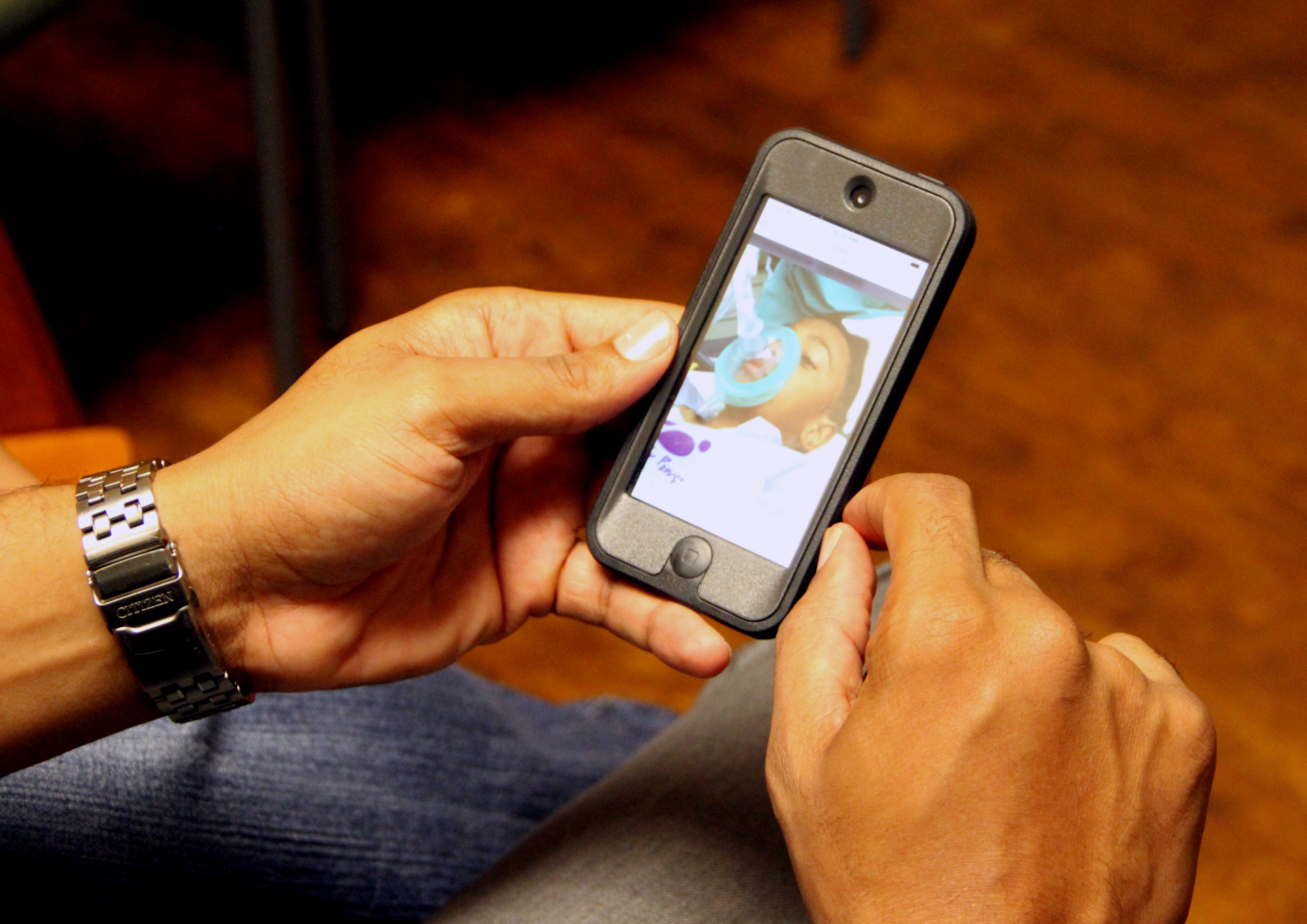 Calvin Barr, Sr. looks at a photo of his son just before Calvin, Jr. underwent spine surgery at Arnold Palmer Hospital for Children in Orlando, Florida. The photo was sent by a nurse in the OR using the EASE app, which allows staff to safely and securely send texts, photos and videos to the smartphones of families and loved ones. Check out the Barr`s reaction to the app: bit.ly/1x820XI 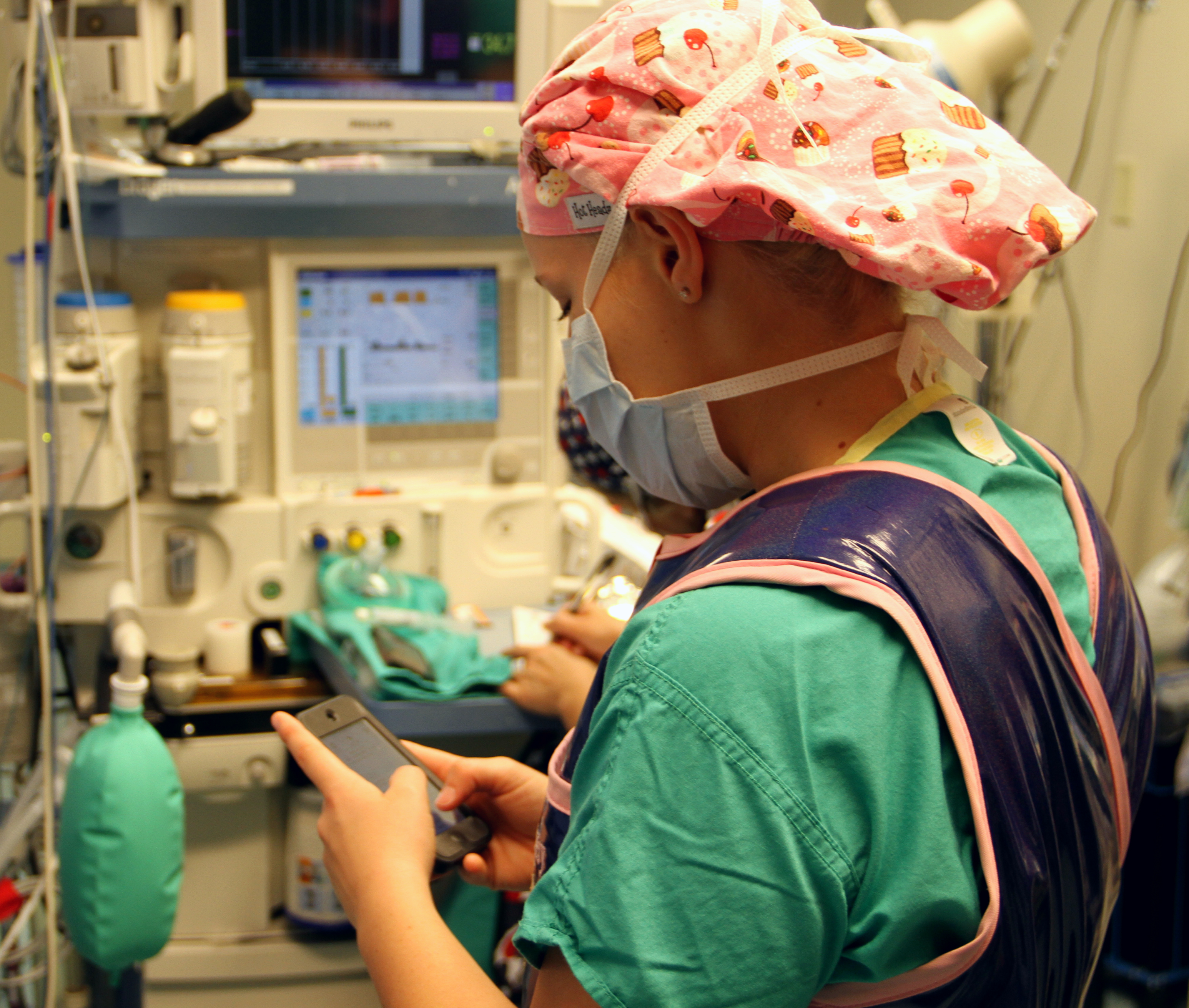 A nurse at Arnold Palmer Hospital for Children in Orlando, Florida takes time during surgery to text the family of 8 year old Calvin Barr, Jr. The boy underwent spine surgery recently and nurses kept his family up to date using the EASE app, which allows them to send secure text messages, photos and videos to family smartphones. See the app in action: bit.ly/1x820XI 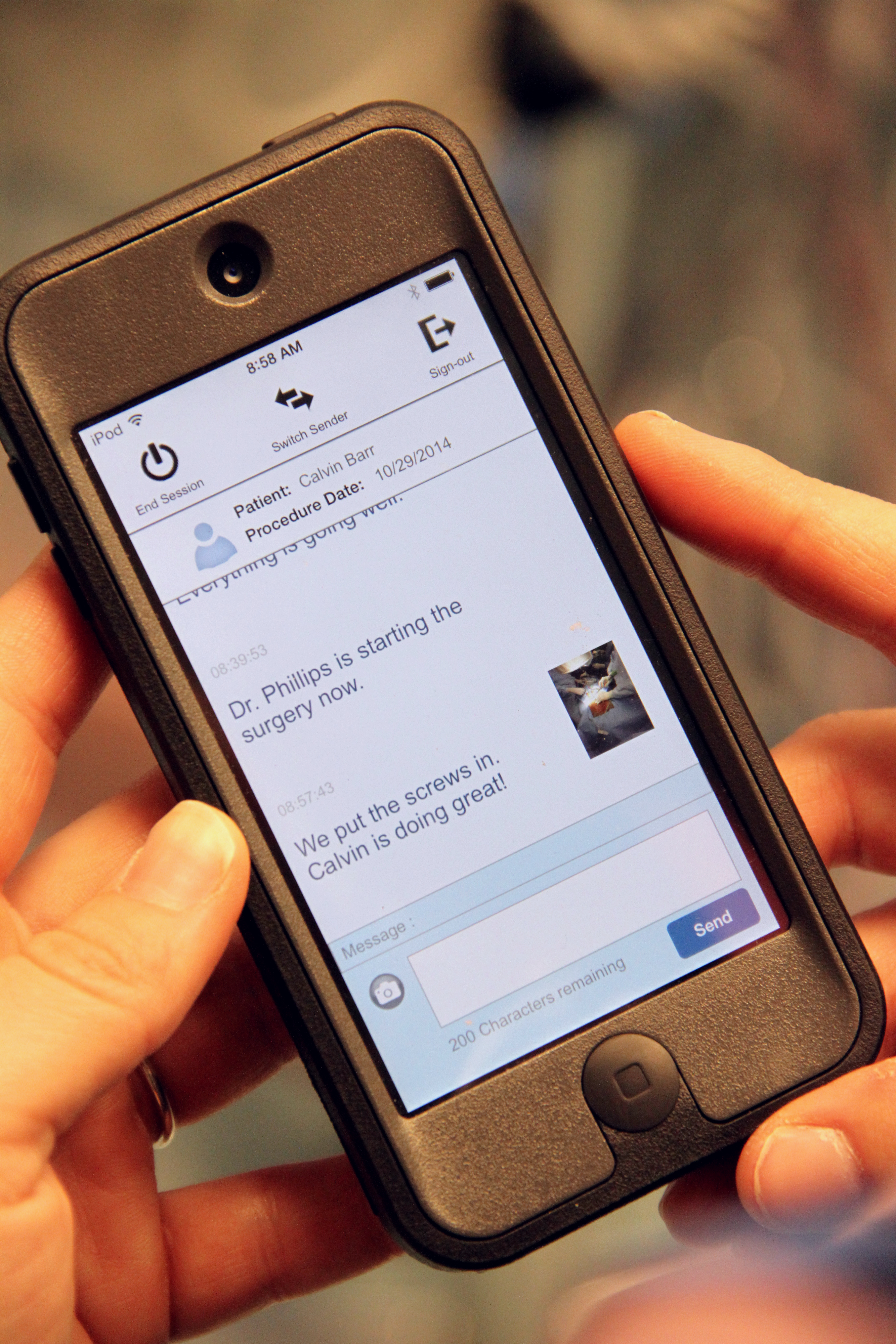 These are some of the messages sent from the operating room during a child`s recent surgery at Arnold Palmer Hospital for Children in Orlando, Florida. Using the EASE app, developed by doctors at the hospital, nurses can send secure text messages, photos and videos to the smartphones of family members. See how the app works here: bit.ly/1x820XI 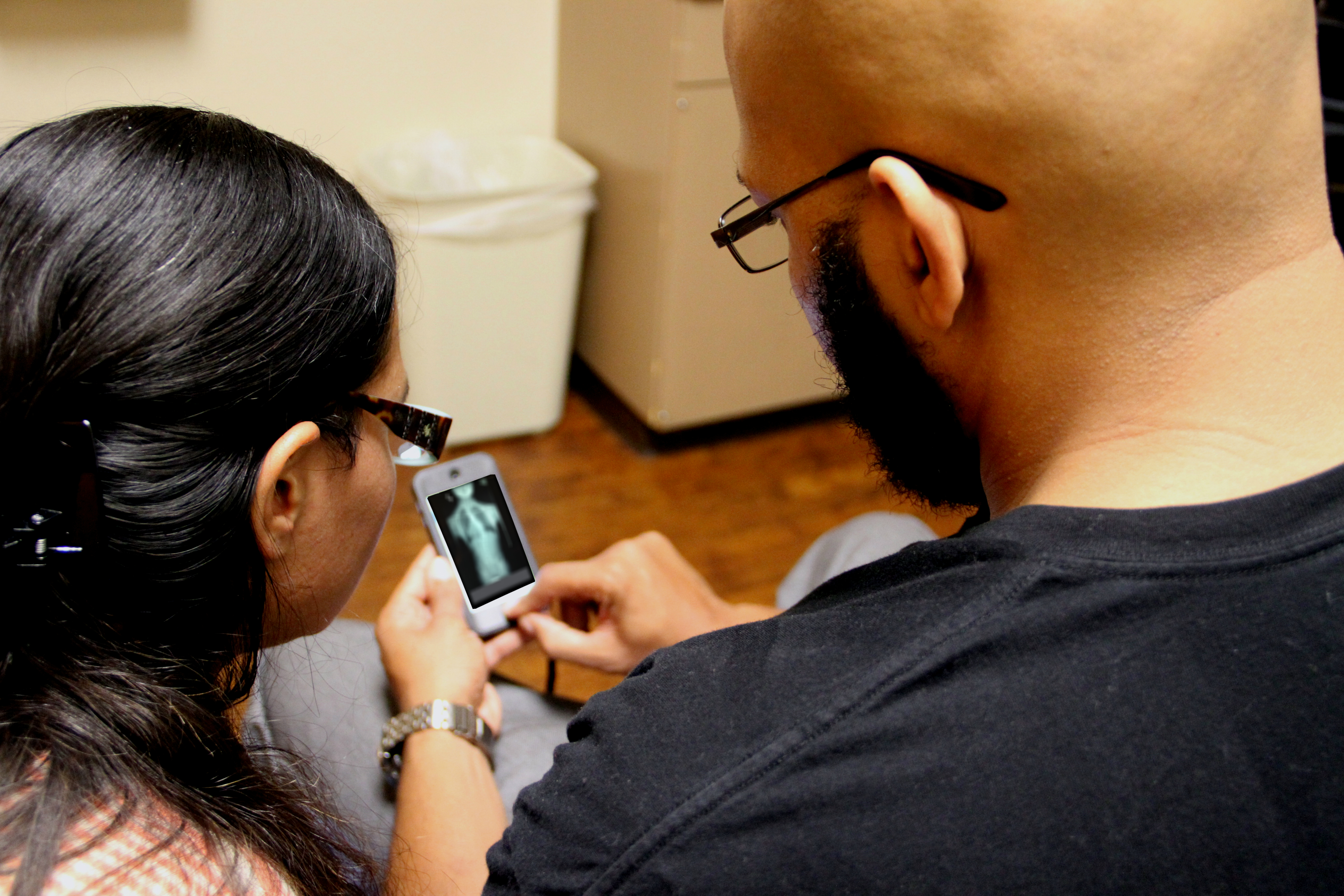 Emily and Calvin Barr, Sr. look at images sent to them from inside the OR during their son`s recent surgery. The EASE app, developed by doctors at Arnold Palmer Hospital for Children in Orlando, Florida allows nurses to send secure text messages, photos and videos to families to keep them up to date every step of the way during their child`s surgery. See the app in action here: bit.ly/1x820XI 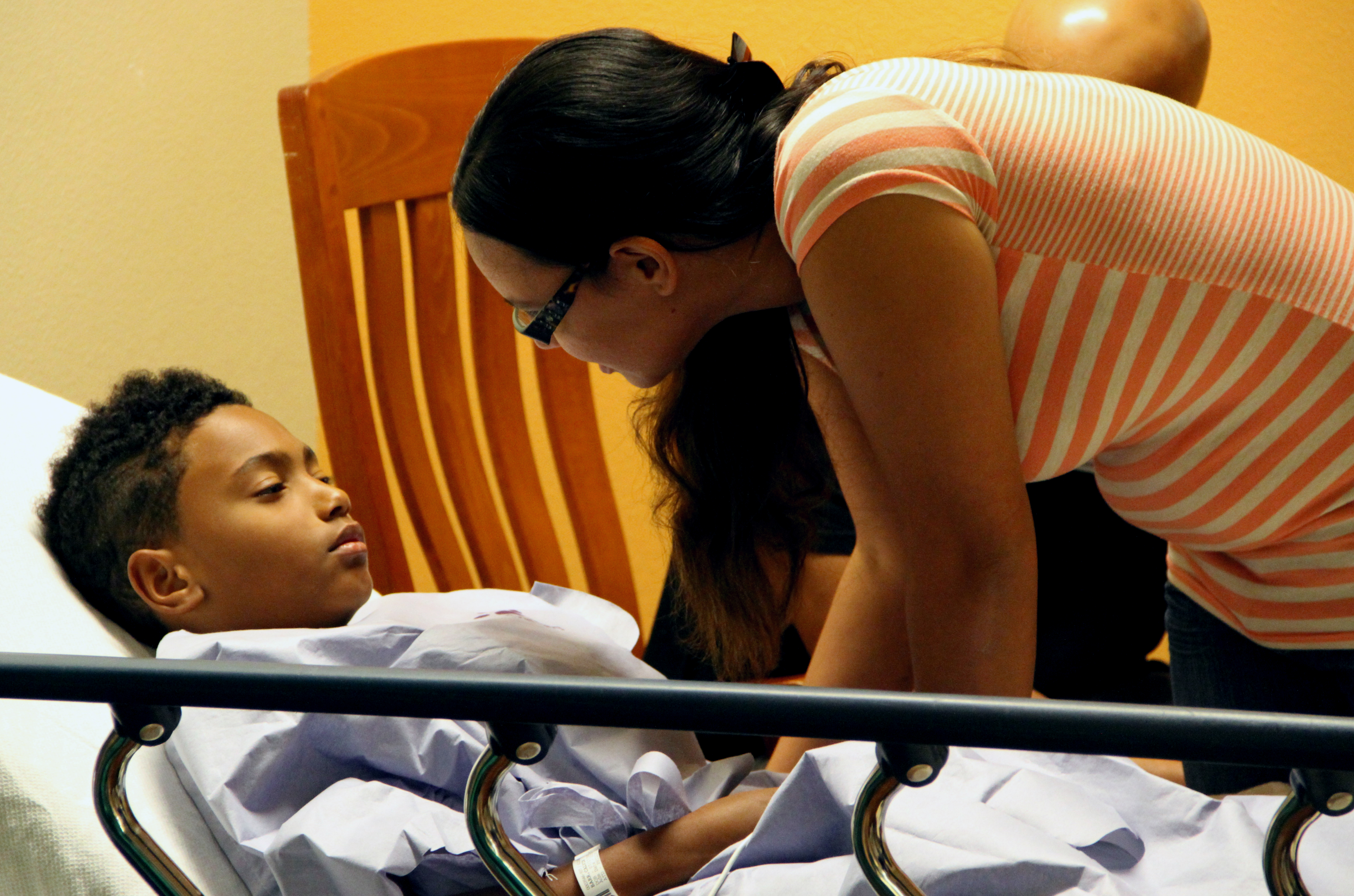 Emily Barr calms her son Calvin Barr, Jr. before he is taken into surgery at Arnold Palmer Hospital for Children in Orlando, Florida. Thanks to the EASE app, developed by doctors here, Emily and her husband were able to get regular text messages, photos and videos on their smartphones so they could stay informed during his operation. Details here: bit.ly/1x820XI