In fact, according to a recent survey, more than half of all children get their first cell phone by age 6, just as they’re starting first grade. Three out of four children now own tablets and nearly as many have video game consoles. “There is so much vying for a child’s attention, it doesn’t take much for kids to get preoccupied during the summer months and spend a lot more time online than they do outside.”

To help families find a healthy balance, Moorjani has some tips.

Do more than set time limits – The current recommendations from the American Academy of Pediatrics (AAP) puts a 2 hour time limit of screen time per day for children over the age of 2. But Moorjani says screens are so pervasive these days, merely setting time limits may not be enough. “It’s not just how much time your child spends on their devices, it’s the content they’re consuming. Parents need to know exactly what their children can see and control that content as much as possible.”

Consider this: the current recommendations based on setting time limits for children published in 2011 and only addressed things like television and video games. However, because the first generation of tablets had just come out at that time, the guidelines don’t mention the use of tablets or smartphones by children. “We can’t watch our kids 24 hours a day to make sure they honor time limits, but we can control what kinds of content they have access to, and parents should take an active role in doing just that,” said Moorjani.

Remember, not all screen time is bad – There is a difference between a child simply watching something on a device and actually interacting with it. “It’s the difference between consumption and creation,” said Moorjani. “If a child is passively consuming media, it’s not doing them any good, but there are some 80,000 apps considered educational that may actually help them.” During the summer months, in fact, many parents use educational apps to help their children retain and even sharpen things like language and math skills.

A word of caution from the AAP, however: there are apps that claim to be educational, but to date, there has been little research to validate their educational value. To learn more about age-appropriate content, go towww.commonsensemedia.org.

Set up media-free zones in your house – One way to balance social media with personal interaction is to establish media-free zones in your house. “Make a rule that in certain places, or at certain times, there are to be no devices whatsoever,” said Moorjani. “The family table is a perfect place to start. No matter if we’re eating breakfast, lunch or dinner, the table is the one place where we communicate face-to-face and can really put the focus back on the family.”

Bedrooms are another important media-free zone. Research has shown that the presence of screens in a child’s room – from televisions to smartphones – leads to later bedtimes and often serious disruptions in sleep patterns. Without rigid schedules during the summer months, kids may be more tempted to use screens in their bedrooms late into the night.

To prevent the misuse of screens, make a family charging station so that all devices can be accounted for and monitored when they are not to be in use.

Don’t leave kids to their own devices – The reason kids may not use their electronic devices as much during the school year is because they simply don’t have the time. Phones and tablets are forbidden in many classrooms, and if your child takes part in extracurricular activities, they may not have access to their devices until later in the evening.

“If a busy schedule works during the school year, there is no reason it can’t work during the summer months, too,” said Moorjani. “With a little pre-planning, you can sign your kids up to play sports, go to camps, do volunteer work and a myriad of other activities that will limit their screen time opportunities.”

Parents can also assign chores to children that require them to spend time outdoors and may want to consider creating physical challenges for kids to complete. “Set a goal for a certain number of miles they ride their bike each week, for example, or help them organize neighborhood basketball or softball tournaments,” said Moorjani. “If you don’t want your child staring at a screen this summer, give them something else to do. You may be surprised how much they like it.” 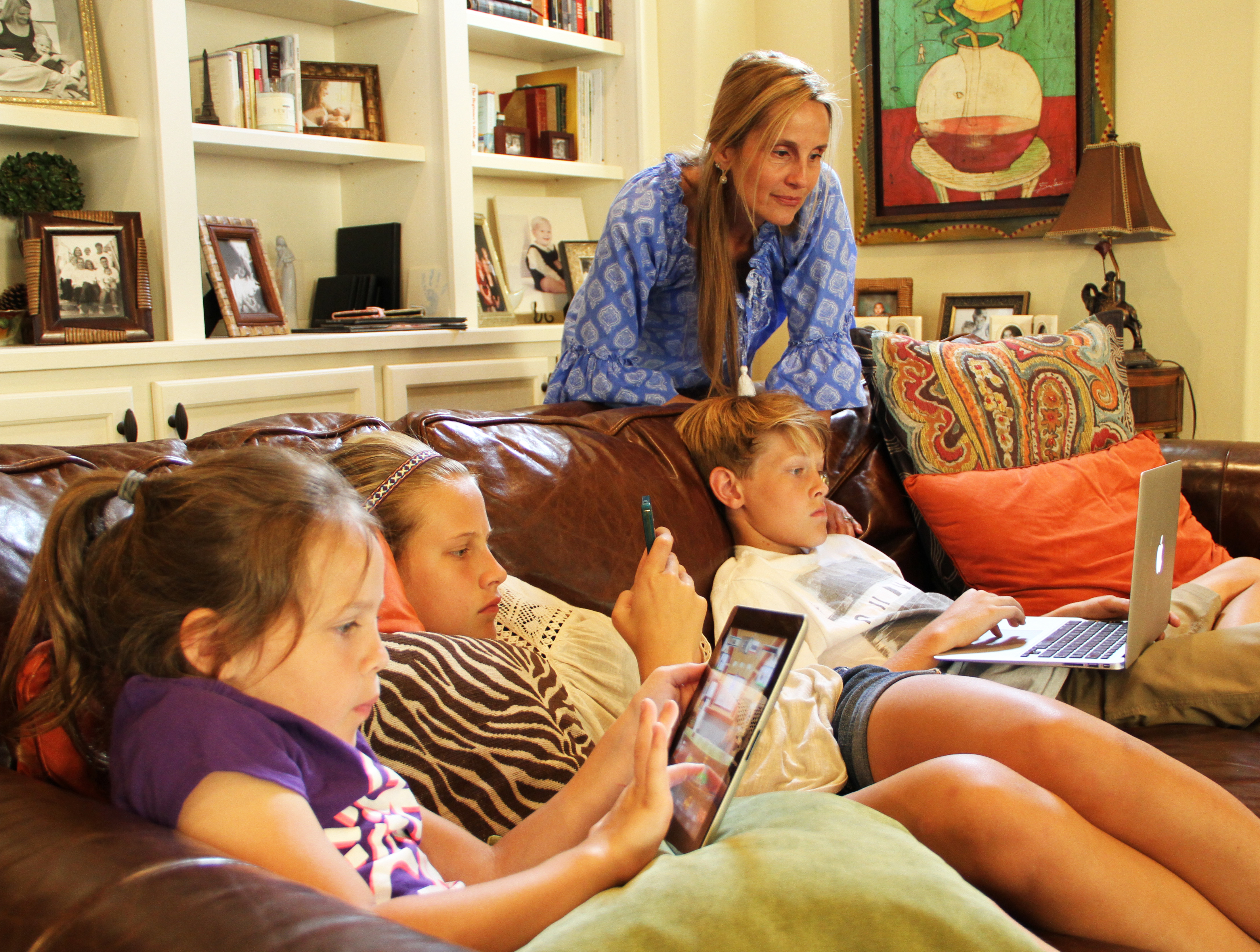 Dawn Herron, of Orlando, Florida, looks over the shoulders of three of her children as they spend time on various electronic devices. 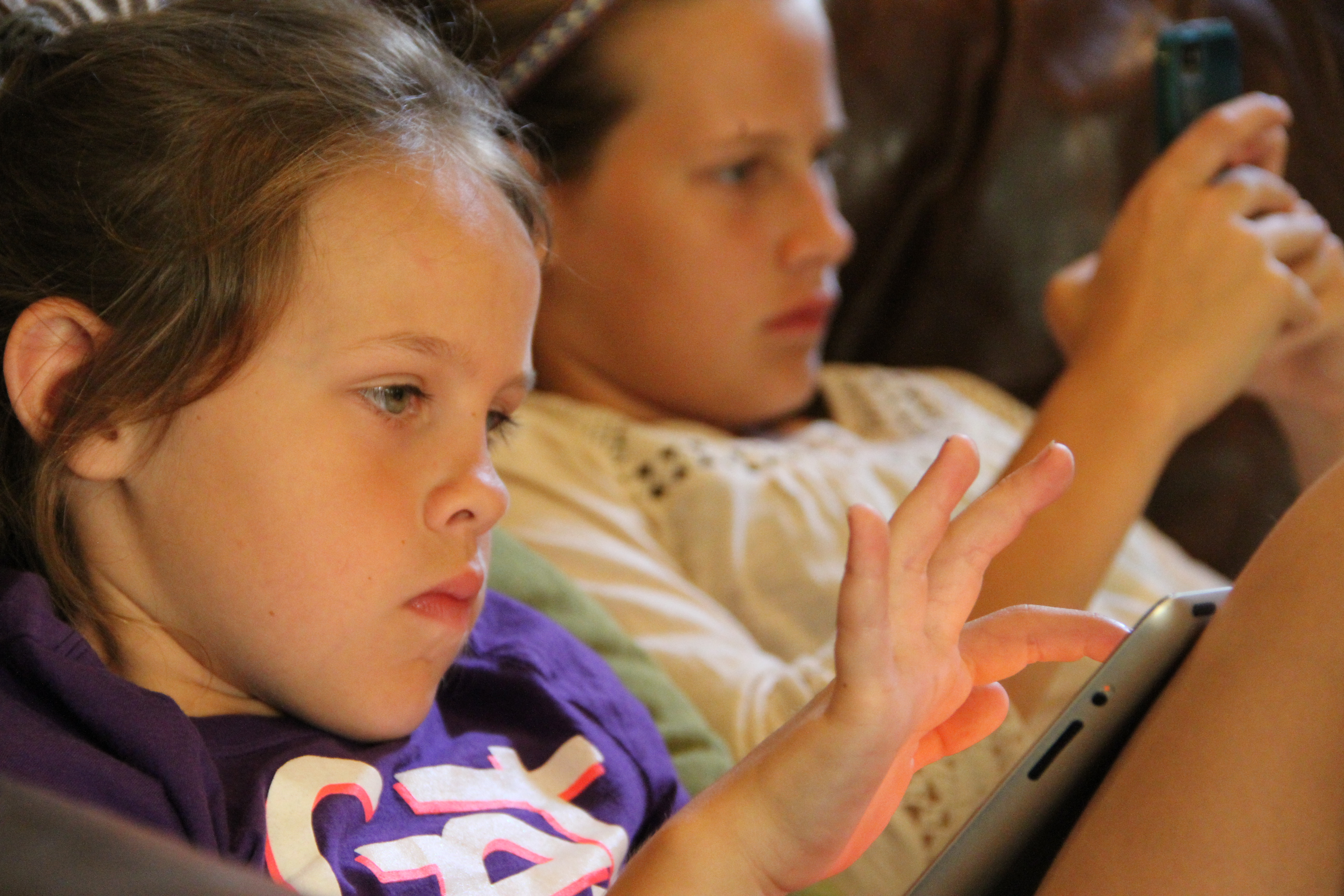 Chapel Herron, front, and her sister Lillie enjoy some screen time at their home in Orlando, Florida. 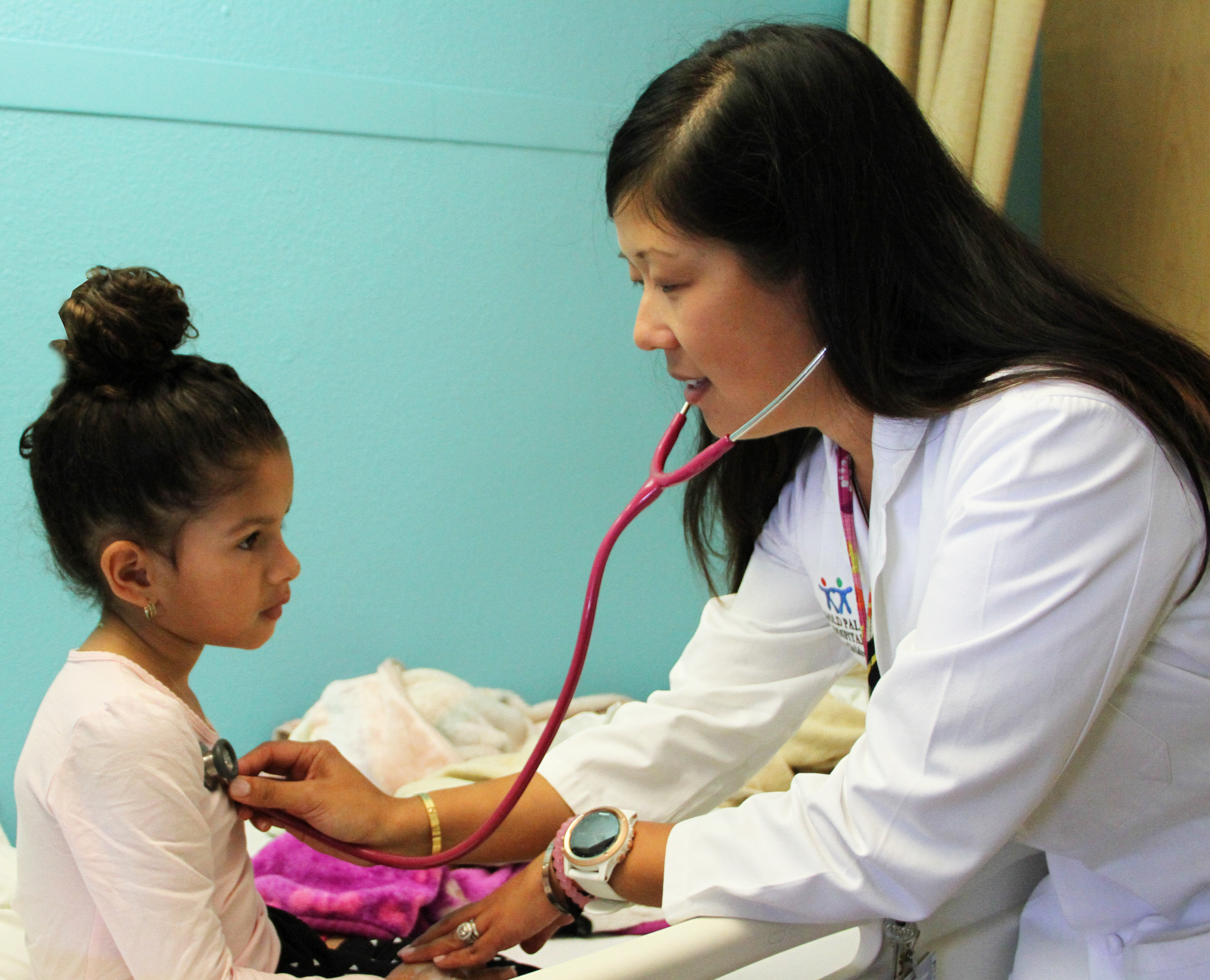 Dr. Jean Moorjani checks the heart of a young patient at Arnold Palmer Hospital for Children at Orlando Health. Moorjani is a noted advocate for making sure children engage in appropriate and responsible screen time on electronic devices. 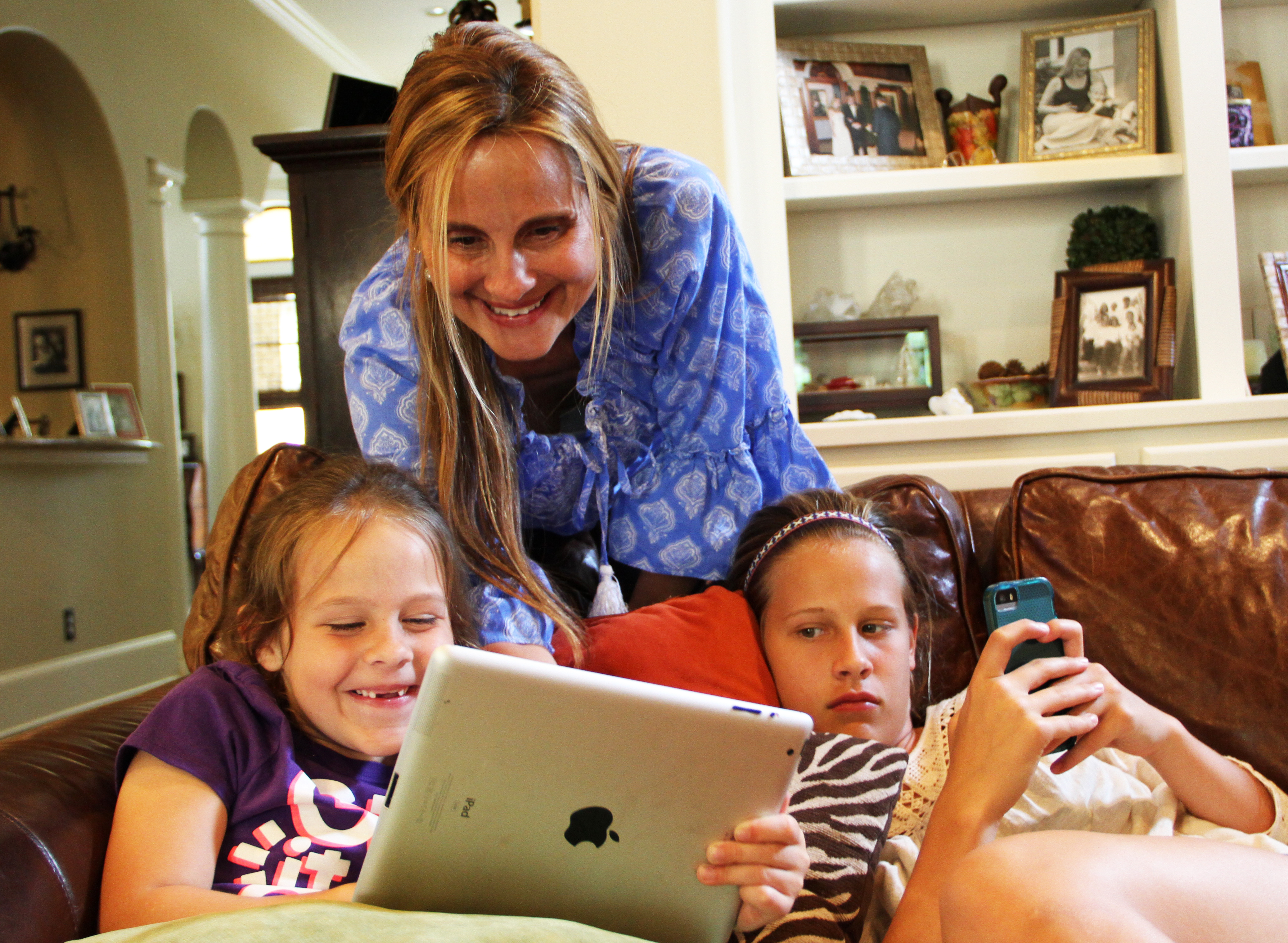 Dawn Herron, a mother of 6 from Orlando, Florida, makes it a point to engage in screen time with her younger children, including Chapel, 7 (left), and Lillie, 13, (right). 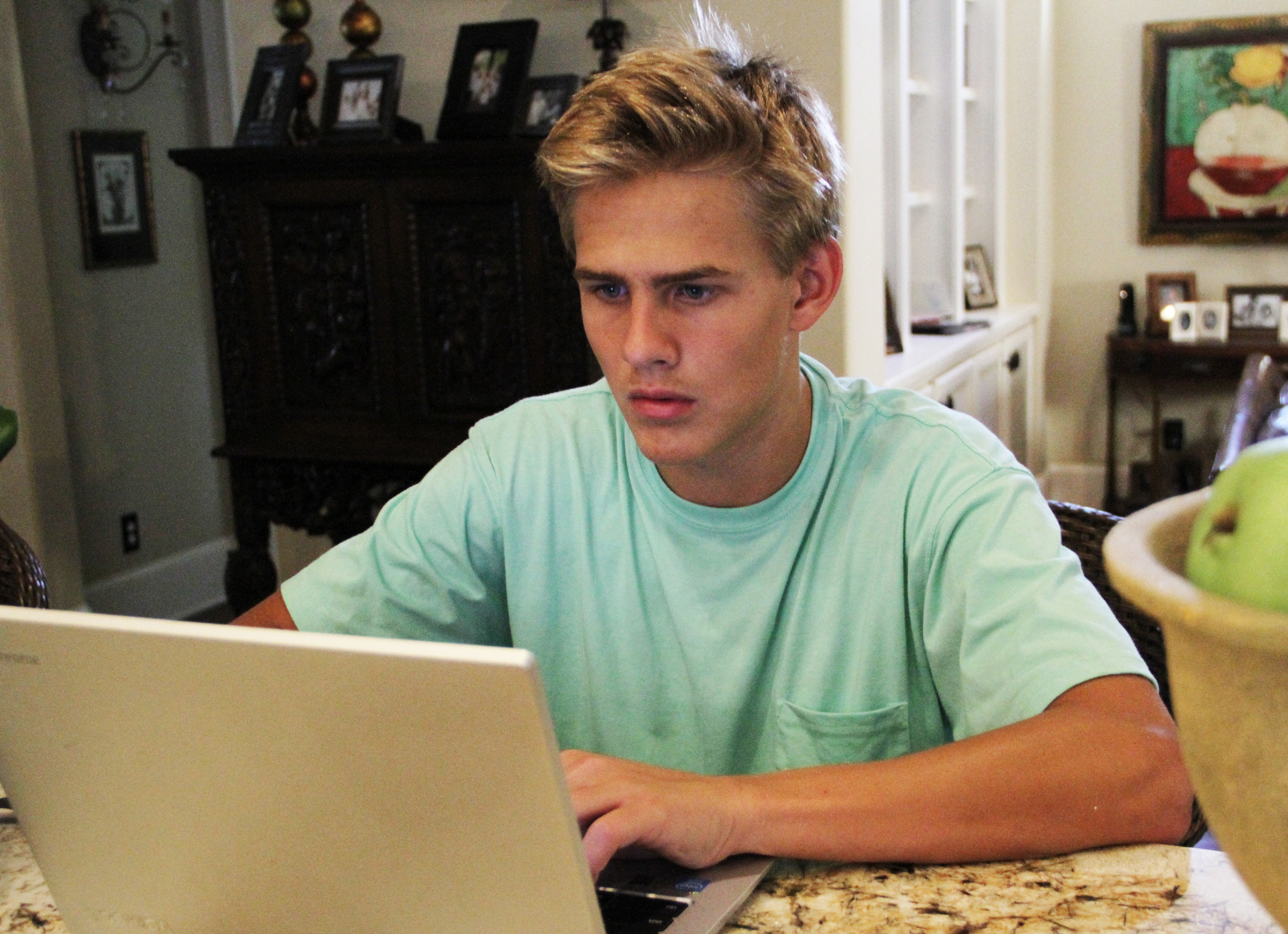 Chase Herron, 16, spends time on his laptop computer at his home in Orlando, Florida. Experts say screen time in the summertime often rises dramatically in children. They urge parents to plan ahead to make sure kids are using electronic devices responsibly and only in appropriate amounts. 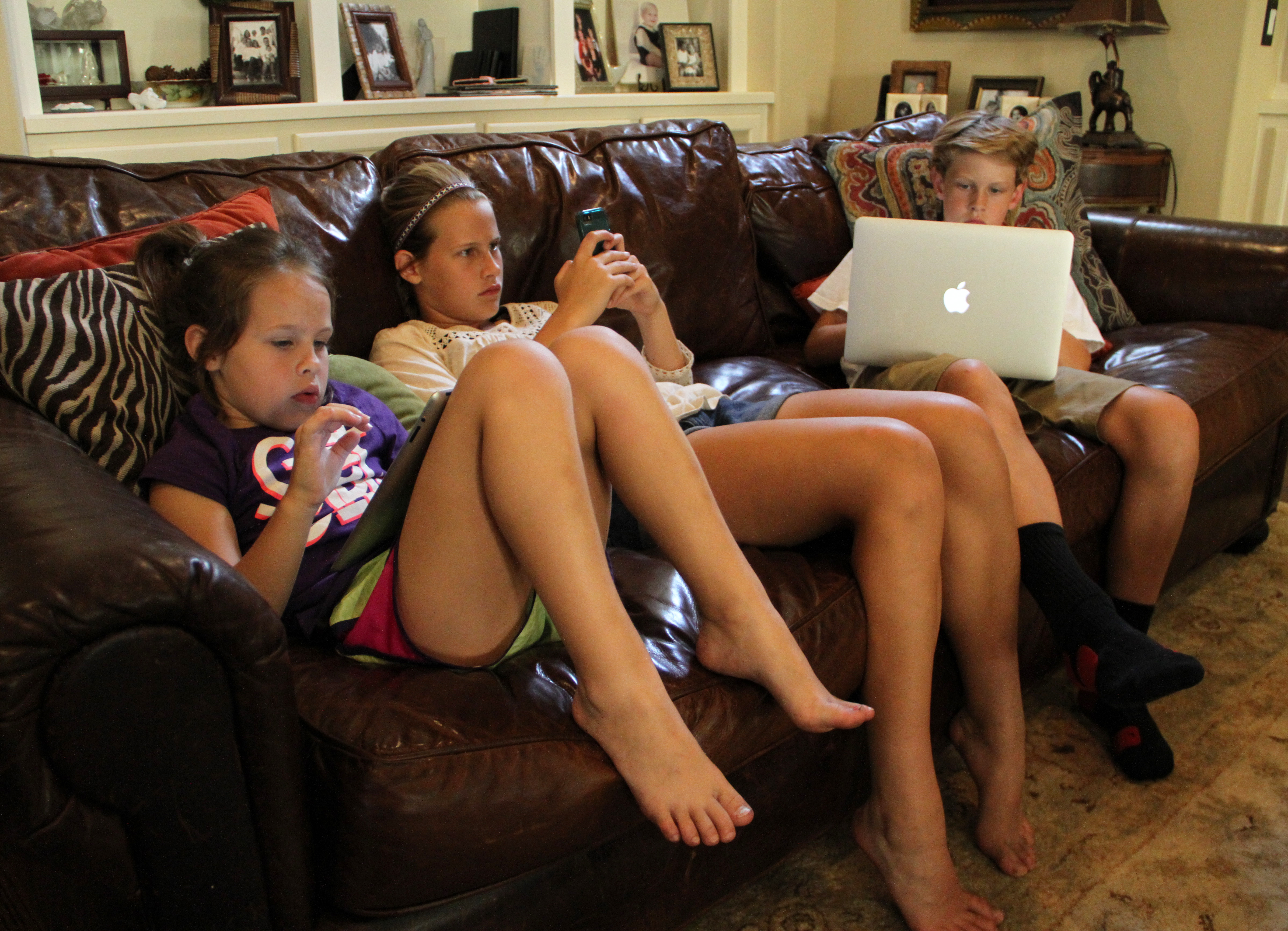 Chapel Herron, left, enjoys screen time with her siblings, Lillie and Miles, at their home in Orlando, Florida. Experts urge parents to set limits for the use of electronic devices, because screen time often rises dramatically in children during the summertime.